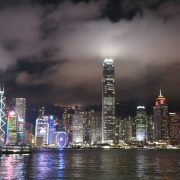 For most professionals in the financial industry, July 21, 2005, was a historic day. On this day, the “People’s Bank of China” (PBOC), with the authorization of the State Council (1), announced China’s new exchange rate regime from a peg to the U.S. dollar to a basket of currencies based on market supply and demand. In essence, the Renminbi (RMB) would be re-valued by about 2 percent to 8.11 yuan per U.S. dollar(2).  Moreover, the closing rate at the end of each trading day would become the central rate for a trading band on the following day. Nevertheless, the daily trading price of the U.S. dollar against the RMB in the inter-bank foreign exchange market would continue to float within a 0.3 percent band around the official parity published by the PBOC. The trading prices of the non-U.S. dollar currencies against the RMB would be allowed to move within a certain band announced by the PBOC. The PBOC would also make adjustments to the RMB exchange rate band, when necessary, according to market developments as well as the economic and financial situation.

Is the new currency exchange regime more flexible? Was there really ever a deviation in the structure of the exchange rate regime to a managed float system?

At first glance, it could be reasoned that the new currency rate regime is not as flexible as the previous one, but is instead a combination of two currency exchange rate methods with similar structures.  In fact, Chinese authorities have never abandoned the previous exchange rate regime of the peg but instead, maintained the current managed float system while making minor changes to certain variables. Thus, this combined system could be termed a “crawling managed float” which consists of the managed float system and a “basket band crawling system” (BBC). In both methods, all variables(3) remain the same except for the change in the target currency from the U.S. dollar to a basket of currencies. In order to better understand the crawling managed float, it would be beneficial to explore examples of both currency methods: the managed float regime and BBC system.

In a “basket band crawl” (BBC), the effective exchange rate is also based on a basket of currencies of major trading partners. The difference lies with allowing for greater fluctuations in the short-term. This system maintains a country’s export competitiveness while tracking the currency trends of its major trading partners. Moreover, the system prevents speculators from knowing how authorities would react to movements in market exchange rates, thus reducing the likelihood of currency attacks. Singapore and Thailand are often cited as examples of countries in Asia that have exchange rates systems similar to a BBC.

It appears that Chinese officials favor maintaining a high growth rate in GDP terms while risking inflationary price pressures over the long-term. If so, targeting and maintaining a stable effective rate over the short-term will provide ample time to build on country-specific fundamentals such as increasing domestic demand and improving financial infrastructures while protecting gains on the export side. Moreover, if timing is what the Chinese authorities are seeking, then implementing a “crawling managed float” is the most appropriate currency rate regime. Nonetheless, the risk associated with this currency method requires a sustainability and further expansion of the current GDP level. This is economically impractical and non-beneficial. In the case of China, GDP growth has mainly been export driven and maintained by elements of capital controls and a favorable currency regime. Since export demand is not a constant variable, maintaining the current level of high GDP growth would require increases in either domestic demand and/or foreign direct investment. The PBOC has made some efforts to increase foreign direct investment and is encouraging more domestic consumption. Nonetheless, domestic inflationary price pressures may impede the PBOC’s efforts. In short, “all good things come to an end” and unforeseen market forces, once they subside, can hinder the objectives of the Chinese currency regime.

It goes without saying that the PBOC will continue to control the two most important elements in the foreign exchange marketplace: flexibility and transparency. Flexibility, at least in the foreign exchange marketplace, can be measured by the change in daily volatility and cumulative change over a period of time. Given these factors, market participants can trade from the volatility and speculate, with data received, the direction of the marketplace. Because there is little public information regarding the respective country weights of currencies in the basket, any possibilities for speculators to participate in the marketplace are eliminated(4).

That being said, the narrow band of 0.3 percent sets boundaries on the movement of the currency.

In summary, unfavorable long-term indicators, such as inflationary pressures, a change in the balance of trade between the U.S. and Japan and foreign direct investment inflows may cause Chinese officials to make some adjustments to the currency regime. Changes will occur but at a moderate pace and may include adjustments in the value of the currency, expansion of the currency band from 0.3 percent to 3.0 percent and just maybe, the announcement of the weight percentage of respective currencies in the basket.  Nonetheless, Chinese officials will continue to have a tight grip on the yuan as long as strict capital controls remain in place.  Eventually, Chinese officials will come to understand that financial markets, characterized by such fundamental elements as transparency and flexibility, tend to operate more efficiently.

(1) This illustrates that Chinese bureaucrats were cognizant of the effects of the currency re-valuation decision.
(2) The RMB was re-valued to 8.09 yuan per U.S. dollar.
(3) Variables include the target currency (s), trading band perimeter, and currency regime.
(4) In August 2005, Chinese officials revealed that the U.S. dollar, the Japanese yen, the Euro and the South Korean won were heavily weighted in the basket of currencies.

This article was published during Kenneth A. Goodwin Jr.’s professional secondment as a Mike Mansfield Fellow working at the Japan Financial Service Agency’s International Affairs division and the Bank of Japan. He is also a Nakasone Scholar, The Aspen Institute Socrates Program.

Use Location Intelligence to Combat Financial Crime
Scroll to top